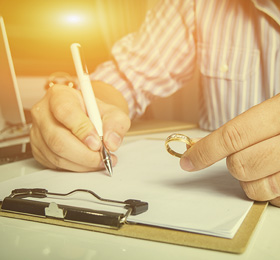 Both prenuptial and postnuptial agreements are considered to be binding contracts in Michigan.

A prenuptial agreement, sometimes called a “prenup,” is a contract that is executed before a marriage that describes what the responsibilities of the parties are in the event that the marriage is later dissolved. In contrast, postnuptial agreements are contracts that married parties execute after the date of their marriage that describes their responsibilities in the event of a divorce.

It is most common to see a prenuptial agreement arise where one party entering into a marriage has significantly more assets than the other party. While the prenup is available to everyone, it would be an uncommon legal tool for younger couples who are beginning to build their asset base. It is more commonly seen for older couples who are entering a second marriage.

Many people have an inherent negative view of prenuptial and postnuptial agreements. After all, the agreements are specifically contemplating that a marriage will be dissolving at a later date.

Valid Reasons for a Prenuptial Agreement

Many people view pre and post-nuptial agreements as nothing more than an estate planning tool. These agreements can ensure that certain assets are distributed in a certain manner in the event that one of the parties dies.

In order for a prenuptial agreement to be binding, it is important that it be thoroughly drafted from the beginning. While there are a truly unlimited number of issues that a pre-nuptial agreement may address, there are certain things that ought to be included within the agreement.

Details That Should Be Included in a Prenuptial Agreement

Circumstances When a Prenuptial Agreement Should Be Considered

As you can see, the drafting and creation of prenuptial agreements are complicated and take numerous facts into account. It is the type of agreement that likely cannot be created on your own. A qualified Michigan family law attorney will know how to best advise you as to whether or not you are in need of such an agreement.